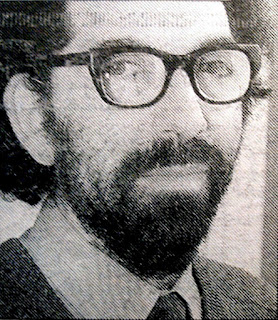 STAR TRIP TO THE MIND


Colin Sutherill is beamed up and then broken down by philosophy


THE Starship Enterprise as metaphysics? Star Wars as the stuff of paradigm? Not quite what Dr Geoffrey Klempner means, perhaps, when he proposes science fiction as a way into philosophy but close.

The fuzzily, abundantly bewhiskered denizen of Ladies Spring Grove, near Dore Station, describes himself as a freelance philosopher, a metaphysician of the old school, not ivory towered and remote in the manner of people attached to universities, more your all-purpose sage.

He is currently promoting his WEA lecture series running in Abbeydale Road, Totley and also his correspondence course and he thinks science fiction is a good way to seduce the intellectually coy into full-blown mind-broadening conceptuality.

He says he likes to get his students to appreciate a dilemma via so-called thought experiments. How would things be if such and such? This is where Mr Spock and Co come in.

"Take for example the question of a person's own identity," says Geoffrey Klempner.

"What is self? Martians could be self. All sorts of things could conceivably be self. Computers could be self. Some people think all there is to us is brain and body. In that case, anything physical can be copied. So a human being could be copied. Think of Star Trek and 'beam me down Scotty'.

"Now most people imagine that the actual bits of the person are taken apart and beamed from space, but it is far more likely that what you would have to do is take a whole body scan, destroy the body, stick it into the engine's fusion capsule or whatever and broadcast, by radio, the blueprint of the body down to Earth, where there's various pots of people stuff, amino acids, proteins, etc. with which you could then build the person again.

"Now would you take that form of transport? This is a thought experiment, right?"

Dr Klempner, leaning back in his book-lined study, is into his stride:

"I'll give you another.

"So we've got people used to the idea that it's a great form of transport. You get into the booth, press the button and off you go at 186,000 miles a second.

"The next thing is someone says to you, right, it's too late now, you can't get out of the booth, but we're going to make two of you. One is going to be retained for nasty medical experiments, the other is going to go home. How do you see yourself? Now that's the point at which, if you believe there is nothing beyond the physical, your certainties might break down and you might think there must be a soul there after all, because all you can think is that your soul will go one way or the other. Either you will end up back home or end up in a medical lab.

Dr Klempner has written a number of these thought experiment stories and hopes to publish them. He says good introductions to philosophy are few and these fictions of his have already withstood the most telling test in that they have held his students' interest:

"They have to be good because many students pay by instalments so they can stop at any time."

The reliance on private tuition and WEA courses for income makes him into a kind of intellectual entrepreneur. There was a time, back in the late '80's when he was actually pinning "Philosopher for hire" cards in shop windows. It probably has something to do with his pre-academic life as a Fleet Street photographer, with honing instincts of survival and self-dependence.

The move from this kind of hardcore worldliness to the role of sage observer seems almost too radical to comprehend. How does he see himself now?

"That's not the kind of philosopher I am. I am more of a Spinoza type of philosopher, looking for this vision of ultimate reality. There are still some of us around."