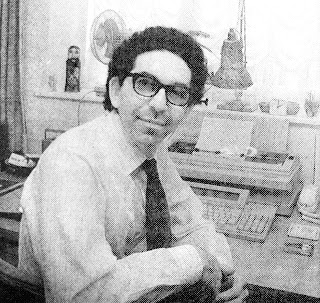 MAKES YOU THINK, DOESN'T IT?

THE work wasn't coming in, so former Fleet Street photographer Geoffrey Klempner took the bull by the horns.

He wrote out a dozen postcards and put them in Sheffield newsagents' windows. 'Hire a Philosopher!' they urged. 'Discount for pensioners and unemployed.'

People duly hired him. The Star picked up the story. More work came in. And this week, Dr Klempner launches his fourth year of philosophy classes at Abbeydale Hall, Totley discussing, as he says, the assumptions behind everyday beliefs. He is that rare creature – a freelance philosopher ... a job that gives you a lot to think about.

It wasn't always going to be like this. Dr Klempner dropped out of his university chemistry course and worked as a London agency photographer in the early Seventies, snapping celebs.

'I remember going to take a picture of Sonja Kristina, the lead singer with Curved Air – everyone trying to get a better picture of her see-through blouse,' he says at his Totley flat, with the painters and decorators hovering outside the window, brushes in hand.

'I had to wait outside court! rooms trying to get a photo-graph of the accused and beat all the other photographers. The rough and tumble was exciting while it lasted.

'You can run round the back of courthouses with the best of them and there are some real skills involved – resourcefulness, constantly assessing a situation for photographic possibilities. But it's the stress, the constant competition to get the' best picture. After a while you get sick of it. I discovered what the rat race was really like.'

He turned to something very different – 'writing up address lists for the Office of Population, Censuses and Surveys, the most boring job anyone could ever invent.' And then -- a Doctorate in Philosophy. And then – the dole.

'When I signed on, I filled in the usual form that asks 'What jobs are you prepared to do?' I put 'Philosopher'. The woman behind the counter suggested 1 might be flogging a dead horse, but if philosophy is the only thing that makes your life meaningful, there's no point in doing anything else.' The painters, with their flask of coffee, are getting nearer.

'People who are just starting in philosophy won't let you get away with saying things philosophers take for granted,' he says in his study, bookshelves stacked – immaculately neatly – with Space Time and Deity and Phenomenology of Perception and Scepticism and the First Person.

So, in our hyper-stressed times, do people come to his classes expecting the key to the meaning of life?

'You find that when things are going well in a materialist society, people are less inclined to question materialism. It's when their credit card is stopped that they might start to ask 'Does it matter if I can't afford a new video?'

'I have people with considerable personal problems who find philosophy a help – the consolation of rising above your problem and seeing it in a wider perspective. But philosophers spend a lot of time questioning the question, I'm working on a book at the moment and I'm not sure I agree with it.'

Outside the painters are finally confronting one of the Great Issues: 'When it's all painted, where are we going to put this flask of coffee?'