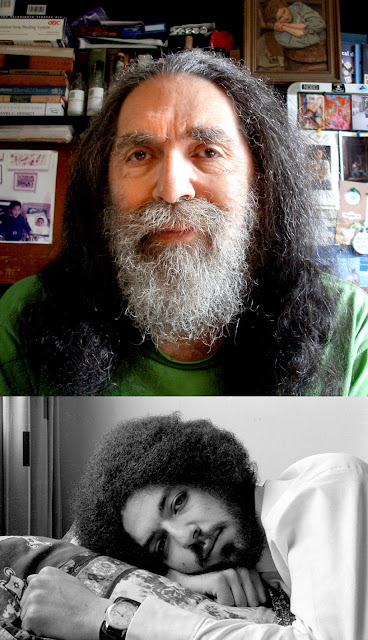 The first was taken yesterday with a Hitachi HDC-1491E digital camera.

The second was taken with a Pentax Spotmatic F with 55mm Super Takumar lens in 1970.

Whatever you do, or don't do, time will have its way with us.

Posted by Geoffrey Klempner at 04:06

Back in 2001, it was philosophos.com. Then, after the person who lent me the 'dotcom' address took it back, it became philosophos.org.

It is now hosted permanently on the SDF site at http://philosophos.sdf.org.

The jewel of this collection of pages is Dr Anthony Harrison-Barbet's Philosophical Connections, a unique hyperlinked history of philosophy covering over a hundred philosophers from the ancient Greeks to the 20th century.

This is what I wrote in my Foreword to the online edition:

"In 1998 , a team of philosophy graduates from Trinity College Dublin had the idea of compiling a series of Profiles of major Western philosophers. In the words of Dr Anthony Harrison-Barbet – author of Mastering Philosophy (2nd Edition Palgrave 2001) in the Pathways Book List – 'This would be a unique and new venture in that the ideas and themes of each philosopher would be colour-coded and linked so as to show the influences on their thought over the years.'

"At the suggestion of Dr Harrison-Barbet, the work was put onto CD-ROM as an e-text so that the connections could be converted into hyperlinks. There are 126 profiles, and some 20,000 links, summaries of the philosophies, individual biographies and book-lists, and a full hyperlinked bibliography at the end. In all the project adds up to nearly 900 A4 pages. The Senior Editorial Advisor is Professor J.C.A. Gaskin.

"The project was never published. The unusual format proved difficult to sell to publishers, and the group lacked the resources and marketing expertise to publish the CD-ROM themselves. I first heard about the project in September 2008, when I received an email out of the blue from Dr Harrison-Barbet offering to make the material available to students at the Pathways School of Philosophy as well as visitors to the Pathways websites.

"I was intrigued. When I started to explore the CD-ROM, however, it became clear that in terms of quality and coverage of individual philosophers this work ranks alongside the Philosophical Encyclopaedias from Stanford, Routledge, Oxford or Cambridge.

"At over 350,000 words, Philosophical Connections is not only a valuable study aid but a significant contribution to the study of the history of philosophy. This work has to my knowledge never before been attempted on such a large and intricate scale.

"A beginner's first impressions of the e-text are somewhat daunting. However, with the help of author's How to use the profiles, one soon gets the hang of the unique scheme of interconnecting links. The information is incredibly condensed. One could write a paper about each line on each of the many tables of interconnections, or spend hours searching on the internet to find the same information..."

Also on the PhiloSophos site:

Why not take a look?
Posted by Geoffrey Klempner at 11:09

The International Society for Philosophers

"The International Society for Philosophers was formed in 2002 in association with the Pathways School of Philosophy to bring together amateur and professional philosophers from all over the world.

"The mission of the ISFP is to "teach the world to philosophize... We believe in freedom of thought and expression but also in the responsibility that goes with that freedom." (ISFP Mission Statement).

"The Board of the ISFP is responsible for examining essay portfolios and dissertations submitted for the ISFP Associate and Fellowship Awards.

"The ISFP publishes the electronic journals, Philosophy Pathways and Philosophy for Business, and runs online conferences for Pathways students and ISFP members.

From 2002 onwards Pathways to Philosophy and the International Society for Philosophers have been joined together like Siamese twins. What will happen to the ISFP when Pathways comes to an end on 31st December 2020?

I want the Society to continue, no matter what, because the alternative would let down too many people who have invested years of their lives in this project.

As with Pathways, students who have signed up for the ISFP Associate and Fellowship Awards will continue to receive support as long as they need it. However, until the ISFP gets a new, permanent Director of Studies we will not be taking on any new students on the Associate/ Fellowship path.

While we are about it, we could also do with a new Membership Secretary, although I am happy to continue with that function for the time being. I won't be around forever!

I have changed the Blogger address for the e-list archive to https://isfp-pathways.blogspot.com. It is now known as 'The Pathways List'.

The old isfp.co.uk web site is no more. In its place are just five pages, plus the e-list archive, the essential core. Much of the other material was copied from elsewhere and so is still on the web. You can still use the address https://isfp.co.uk which will now forward to http://klempner.freeshell.org/society/mission.html.

We also have a new, simplified application form currently hosted securely on on a private account at https://docs.google.com/forms/.

What are the benefits, now, of joining the ISFP? We are not a Society in the traditional sense. There are no rules or regulations, only an understanding that members should behave in a responsible way, treat one another with respect. We will never ask anything of you, but if you want to contribute, send an email to klempner@fastmail.net and we can discuss your ideas!

Long live the ISFP!
Posted by Geoffrey Klempner at 02:53

First of all, welcome to my new home page and blog!

It has been a bit of a shock to some people that Pathways to Philosophy is coming to an end on December 31st 2020. I will be instructing my web host to bring all the pages down on that date. By allowing sufficient time for the necessary changes, I hope that it will be a graceful end rather than a violent wrench.

The Pathways juggernaut has been sailing along for over two decades and it is not so easy to bring a thing like this to a halt. It is understandable that some would like this to go on forever but obviously that cannot be.

Some features will be preserved no matter what. The archives of the Philosophy Pathways and Philosophy for Business electronic journals have been moved to my permanent free web site http://klempner.freeshell.org, as has Anthony Harrison-Barbet's Philosophical Connections and Dmitry Olshansky's Gallery of Russian Thinkers. If you click a link to any of the articles or pages you find on the web you will be taken to the relevant home page where you can navigate to the page you were looking for.

The panel of Ask a Philosopher has been retired. I will continue to answer questions that I find interesting, under my own name or my two aliases Gideon Smith-Jones and Gershon Velvel. Gideon likes questions with a social or political slant, while Gershon tends to focus on issues relating to God and religion. That way, I can keep discussions of the most contentious subjects at arm's length!

I am still very much here. Having recently published two new books in a very short period of time – The Idiotic Conundrum and A Better Ray Gun to give their short names – I realize that I need more time to concentrate on my own writing. So far as Pathways is concerned, I've done enough, although as previously indicated, students who have enrolled will continue to receive support beyond 2020, because this is something I am obligated to do.

I will be giving regular updates on this blog and also on my Facebook public figure page. Do follow me there. Use the contact form opposite to ask philosophical questions, or if you have anything else you want to say write to klempner@fastmail.net. I hope to hear from you soon!
Posted by Geoffrey Klempner at 03:10

On 31st December 2020 the Pathways to Philosophy web site and all associated web pages will be permanently removed from the web.

After that date, pages will still be accessible at https://web.archive.org, where you can trace the history of the Pathways web sites all the way back to 1997–8.

As from now, there will be very few, if any updates. However, all pages will remain in place until the end date.

Students currently enrolled with Pathways will continue to receive support. However, applications have now been permanently closed.

I have a huge amount of people to thank for their support over the years. First and foremost, the hundreds of students who have enrolled with Pathways going back to 1995, before Pathways went on the web. For a time, a significant proportion of these students were supported by the Pathways mentors working pro bono. Then there are all the contributors to the Philosophy Pathways and Philosophy for Business e-journals, the Panel of Ask a Philosopher, the Board of the International Society for Philosophers, not to forget all the people who have joined the ISFP since it was founded in 2002.

Finally, are many other individuals not included in these groups who have corresponded with me, offered their advice, commented on my writings and given unfailing support. I am grateful to you all.

Why now? That is a far better question than simply, 'Why?' Because everything has a beginning and an end, even (or maybe especially) good things, because I feel now that I have achieved all that I set out to do. Because, I need the maximum amount of time remaining to me to pursue my own personal 'ring quest' in Philosophy.

I have written about this in numerous places. I currently have 15 (fifteen) books in Kindle eBook and paperback. Here are the titles, in the order in which the books were first published on Amazon:

The Metaphysics of Meaning, 2016
Naive Metaphysics: a theory of subjective and objective worlds, 2016
Ethical Dilemmas: a primer for decision makers, 2016
Philosophizer, 2016
Philosophy Q and A, 2017
Philosophizer (Black Edition), 2017
Philosophizer's Bible, 2019
The Possible World Machine, 2019
Searching for the Soul, 2019
The First Philosophers, 2019
Language and the World, 2019
Reason, Values and Conduct, 2019
The Ultimate Nature of Things, 2019
I Might Not Have Existed But Someone Exactly Like Me Might Have Existed In My Place: the idiotic conundrum, 2020
A Better Ray Gun and Other Tales: twenty sci-fi stories with a philosophical twist, 2020


Do consider looking up my books on Amazon. There will be more writings in the pipeline, but I cannot say exactly when!